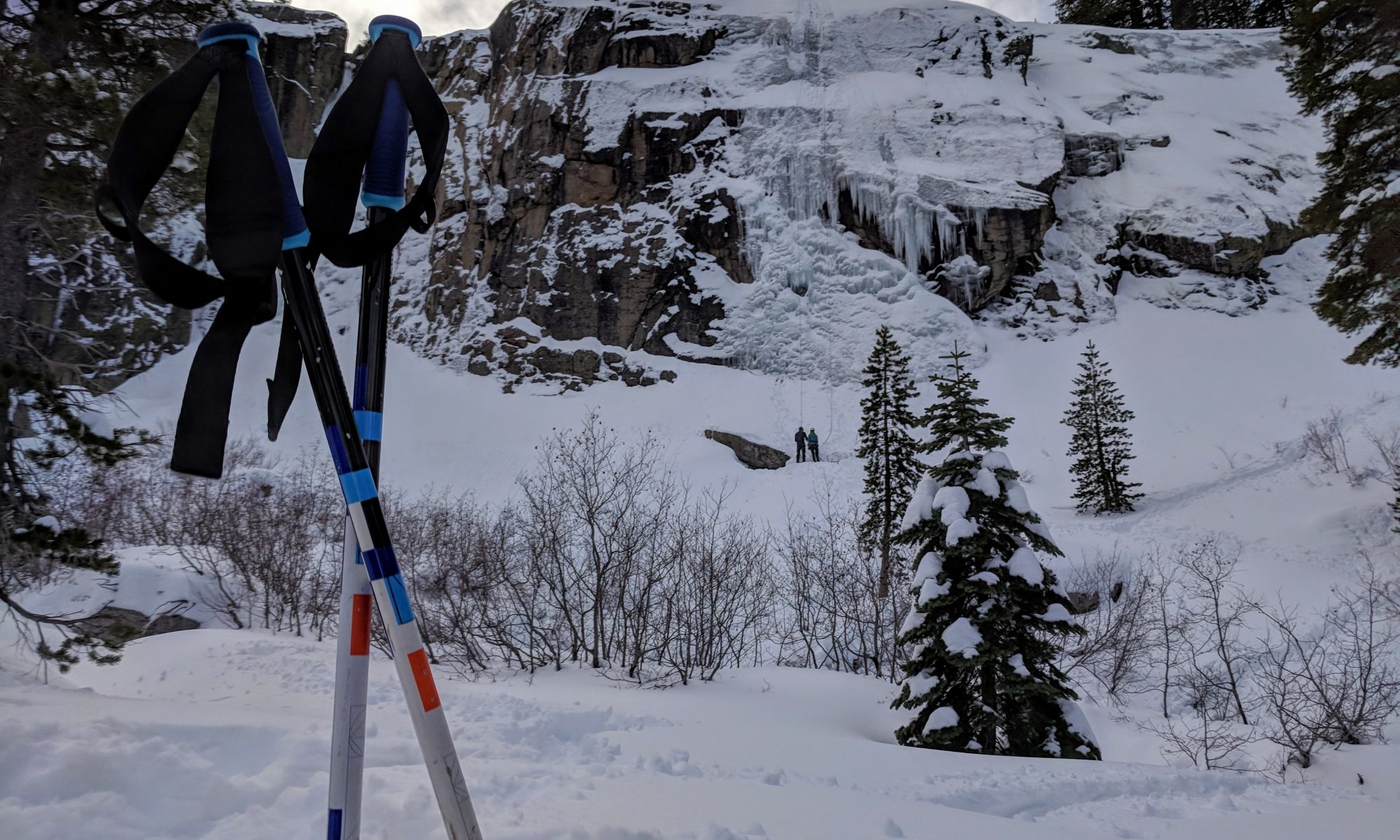 Last year Brent, Patrick and I joined the Tahoe Chapter of the American Alpine Club on their annual ice climbing trip in Truckee, CA. We had an amazing time and decided right then that we’d be back next time. Well, next time has come and gone and once again the trip didn’t disappoint!

Each year the AAC rents out the Lost Trail Lodge for about 10-15 climbers. In the winter the lodge is a snowbound off-grid paradise. About 4 miles of snowshoeing or skiing gets you to the lodge.

This year Brent, Patrick, Ondine, and I started the trek to the cabin around 3:45pm on Friday after a half day of skiing at Northstar. The route was well marked by Sam, the AAC Tahoe Chapter lead and event organizer. We arrived at the lodge as the sun was setting a little after 5:00pm.

This year Patrick and I opted to spend the weekend out in a tent to get more winter camping experience for out upcoming trip to climb Denali in Alaska. We got the tent set up while most of the other climbers threw their gear down in their warm bedrooms… Shortly after Sam had dinner ready and we all grabbed some food and hung out for the evening. As we learned last year, some of the best memories from these trips are swapping stories with fellow climbers at the Lodge.

On Friday, Sam had tried to haul an impossibly heavy sled full of gear miles uphill to Cold Stream Canyon where we were planning to climb, but was stymied by the reasonably deep snow and immense weight of his load. When we found out we all thought he was crazy.

On Saturday morning we took turns hauling the sled and breaking trail up to the ice. This year we had a MUCH better idea of where the ice was but I still managed to get everyone a little bit lost on the way up (what’s life without some excitement??).

The hike up is nearly 3 miles of uphill travel. About half of the way you follow a summer fire road, then turn left at an arbitrary point to head up the canyon and traverse over to the ice. The hike up was significantly more efficient than the crazy route we took last year!

When we arrived at the icy cliff we spent a while talking about which lines were in (what areas of the cliff had enough ice to be climbable). Since I had helped Sam set up topropes last year I volunteered to take a small group to the top to set one of the lines by ascending a steep snowfield at the right (north) end of the cliff. Another group decided to try their luck going up from the south end but found the snow conditions unsafe. A third group planned to lead the line furthest to the right. However, due to the extremely thin ice the leader actually fell, ripped out his ice screw, and landed (unhurt) back in the snow at the base.

It took a long time to get to climb the very steep (45+ degree) slope and break trail through the deep snow up top. We also found out a couple other climbers were trying to climb up a steep rock/ice chimney to bring up another rope. We had the first toprope set up by 1:00pm though, a marked improvement over the previous year thanks to the much more manageable snow conditions.

That afternoon, everyone got a chance to climb the line that Patrick, Darren, and I got a rope on. The two guys who climbed the icy chimney eventually got a rope on the left-most line but nobody had time to climb it before we departed for the evening.

That night was another great dinner and evening of stories and conversations with new friends and plenty of beer (Ondine and I opted for Rumchata, God’s gift to mankind).

On Sunday morning we got started up the the ice bright and early to get in a few more laps. I was keen to try the route that the Ranbir had set up on the left side if the wall but we found the rope frozen solid when we arrived.

I decided to ascend the rope and try to unstick it. After what felt like ages breaking through the inch-thick ice on the frozen rope I finally managed to get it free from the top. Patrick, Ondine, and I all climbed the route and found it incredibly fun!

Another successful day of climbing in the bag, we headed back to the lodge after dropping the ropes and rappelling from the fixed anchors that had been buried under feet of snow last year. We all said our goodbyes, packed up and headed back out – already looking forward to next year!